Thanks to everyone who volunteered and participated on the Metric Running Festival!

The Howard County Striders staged the Metric Running Festival (26.2 km and 5km) last Sunday. Under new race director Grace Tran, they put on the most lavish Metric in the 36-year history of the event. Metric marathon runners received an American Apparel California Fleece jacket as the race premium while 5km runners received a SportScience nice gender specific T shirt. Runners enjoyed the post-race finish festival beside the Kittimaqundi lakefront with croissants and OJ from La Madeleine, coffee, bananas, bagels, donuts, and cookies from Wegman’s, an assortment of Popchips, beef-tips and mashed potatoes from the Ale House Columbia and pizza from Three Brothers. The Still Point Wellness Spa was on hand to soothe aching muscles with massage and acupuncture, along with TheraPearl with product giveaways. Many sponsors contributed to the random drawing with generous support from Feet First of Columbia, TheraPearl, Ale House Columbia, La Madeleine, and Nic Ebright Sports Massage as random awards. Pepsi Cola company sponsored the Pepsi Pacer team and was the premier beverage for the Metric Run Fest with Gatorade, Aquafina and soda for on-course and post-race support. Grace and helper Keith Levasseur began setting up at 2 am in the morning. “The auxiliary sheriff dropped by to check us out,” Keith explained.

Before all of this, though, the Metric runners had to cover the challenging distance from Columbia to Ellicott City and back. In the men’s competition, the lead pack raced through the first two miles in 12:30, which is pretty good, but that pace was too slow for David Toller so he increased speed and took over sole possession of the lead. “I wanted to run about 6 minutes per mile,” he said. “I went through 10 miles in around 60 minutes. It was just me and the guy on the bike.” He finished alone in 1:38:27.
Toller attended Oakland Mills High School and ran on the cross country team for Salisbury State, and his parents were on hand to witness his great victory.

Early in the race, a minor brush occurred between the top two women, Alyssa Hogan and Robyn Humphrey. When Robyn slapped hands with a friend along the course, she inadvertently cut off Hogan, who objected loudly. They soon settled down to racing, however, and Humphrey even apologized. Hogan settled the issue by pulling away after a few miles and cruising to a win in 1:54:19. Last year’s winner of the women’s race, Grandmaster Donna Wecker, finished third among the females.

Some of Metric Marathoners, like Mick Slonaker, had registered for the New York City Marathon the weekend before. When Superstorm Sandy forced cancellation of the New York Marathon, the marathoners descended on the Metric Marathon. “We had to use all that training for something,” Mick said.

For the second year, the Metric also featured specialized pacers running at strictly even paces of 7:45, 8:00, 8:15, up to 11:00 per mile.
Runners could ensure they would run these paces simply by associating with the orange-shirted Pepsi Pacers (sponsored by Pepsi Cola, see?). “We attempt to run within a few seconds of the appointed paces,” explained pacer Jeff Garstecki (8:00 per mile), “regardless of whether we’re going up or down or flat.” Pacers received free entries to the race, including the fleece jackets and those orange t-shirts. 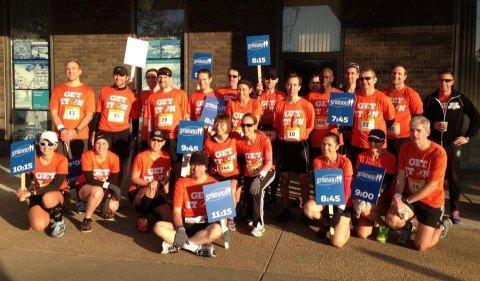 Those not ready for the grueling 26.2 km race (or those with better things to do on Sunday morning) could run the accompanying 5km. This shorter event started 10 minutes after the 8:15 Metric start and ran around a course local to Lake Kittimaqundi. Scott Trama overcame local runners Shanon McIntyre and Hafiz “Coach Pain” Shaikh, while Kelly Westlake beat Jess Ivy by two seconds to win the women’s race.

View More...
Run Through the Grapevine