You are here: Home / Awards / Hall of Fame / Ben Mathews

Those are the words that Ben Mathews used every Saturday morning during the 1980s to start the Bagel Run! Ben’s Saturday mornings actually started much earlier since he drove the course to put out the water every week.

Right after Ben started the “race”, uh run, he took off running at the front of the group. Ben was one of those runners who treated the Bagel Run as a competitive opportunity. 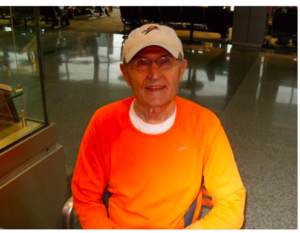 Ben has been a Strider since 1983.
He completed 108 marathons. At least 50 of them under three hours.
He was the Master of the Year Strider in 1986.
He served as a Strider Board Member.
He was the Masters Champion at the Washington’s Birthday marathon in 1989.
He won the Metric Marathon in Columbia in 1992 as Master.
He won the Striders Club Championship series for 1986 where you competed based on performances in the Marathon (Marine Corps), a half marathon, 10K, 5k and the Metric Marathon.
He completed five Grandfather Mountain marathons, and in 1986 in finished 5th overall.
He won the Master Title in the Tampa Bay Marathon.
In the inaugural Disney marathon (1994) he was second in his age group (3:03).
While a Strider ran a 2:50 in the Marine Corps Marathon.
His marathon PR is 2:48 in 1982.