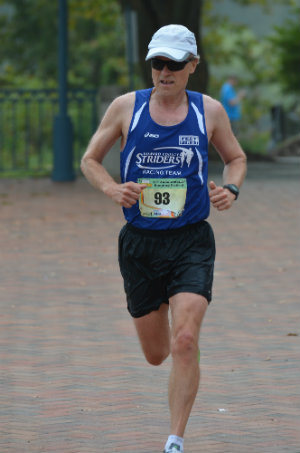 Doctor “Bobby” Gessler started running after he finished his residency at Brown University in 1988. He has represented the Striders both as a talented runner and as an exceptional coach. He has served on the Howard County Striders Board of Directors as a representative for the Howard County Junior Striders for whom he has been a coach for more than ten years. (His four daughters have run as Junior Striders and as Striders.)

In 2012, Bobby received the Goodsports Coach of the Year Award from the Howard County Department of Parks and Recreation for his coaching efforts as part of the Junior Striders program. The award recognizes “the coach’s commitment, dedication, preparation, respect for officials, teaching skills, emphasis on teamwork, team ethics, leadership, motivation, sportsmanship and patience in their work with youth and adult sports.” In addition to his Junior Striders coaching, since the fall of 2009, he has voluntarily coached a training group (which contains a majority of the Striders’ women’s racing team) that runs track workouts and tempo runs on Tuesday and Thursday mornings.

Another example of Bobby’s commitment is that he was instrumental in developing the Striders’ Automated External Defibrillator program and serves as its Medical Director.

In late 2014, Bobby was notified that he had passed his level 3 (USATF) and level 5 (IAAF) course, and is now qualified as an “elite coach.” To quote from the USATF/IAAF course description, “… a coach not only highly experienced, but (who) has the knowledge to coach or instruct at the highest levels of the track and field profession.”