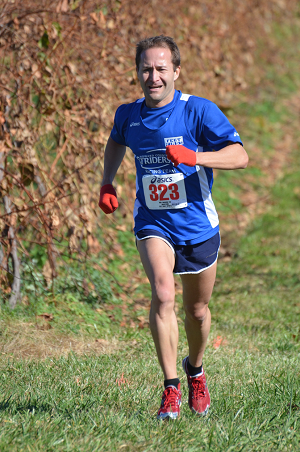 Conrad Orloff started running at age 11, when he participated in his hometown’s Oak Apple Run 10K. He ran cross country and track throughout high school, and then in college at the United States Naval Academy. As a submarine officer and a navy diver, he competed (and still does) for Navy’s various running teams. He joined the Striders in 2003, and proudly wears a Striders’ singlet in local and national races.

From his teens through masters years, his results have been universally outstanding. He has completed 25 marathons, each one has met the Boston Marathon qualifying standard, starting with the Marine Corps Marathon in 1989 when he ran 2:58. Conrad has run every marathon in under 2:58 with a 2:37 at Boston, 2:39 in Chicago a 2:39 second Master at the Marine Corps, a 2:40 second overall in the Erie Marathon and a 2:48 27th overall in the 2013 World Championships – Military in Suriname, South America. One of his more memorable races was the 2009 Victory Marathon in 100+ degree heat, on a course with only six water stations, in Baghdad, Iraq, finishing second overall in 2:49. He’s been second overall in the Metric Marathon; second master at Clyde’s; and 54:10 in the Army Ten Miler Shadow Race in Baghdad (actually a 10.2 mile course). In the Navy/Air Force Half Marathon, he ran 74:35 as the Masters Champion and setting the course record in 2014 and 75:30 as the Masters winner in 2013. His fastest post collegiate 5K came in 2013 at the USATF Master’s Cross Country Championships in Fleming, NJ where he finished 9th overall in 16:05.

Conrad lives in Columbia just off the Bagel Run course and works at the Johns Hopkins University – Applied Physics Lab.