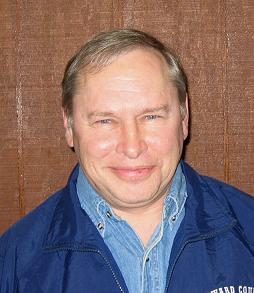 Dickie George has been a Strider since the late 1980s. He served on the Board of Directors for 15 years, and was President for five years. Not only was he the club’s Chief Executive Officer, but he was actively involved in supporting the Howard County high school cross country and track and field programs. Dickie rarely misses an opportunity to work at the finish line of the major high school meets. In addition, he frequently “runs” or oversees the finish line of many of the Striders’ special races — Clyde’s, the Metric, the Women’s Distance Festival, the Ten Mile Club Challenge race and many others. Dickie was/is also an enthusiastic participant in running and races.

He has run most of the Striders’ special races and the weekly series runs, as well. October of 2005 was the first time he missed participating in the Run Through the Grapevine. He had a string of all eleven Grapevines, until injuries forced him to miss his first one, and in most of those years he was on an award winning team. He proclaims his biggest running achievement — and it is a biggie indeed — was winning the first place coveted brass turkey in the 1993 Thanksgiving Turkey Trot.