You are here: Home / Awards / Hall of Fame / Ed Wilson

Ed began running on the Cross Country team at Dulaney High School in Baltimore County where he was co-captain of the 1979 State Championship squad. He was also an All-Metro selection for Cross Country and two-time Maryland State Indoor Track medalist in the 2 mile run. He ran for three years at the U.S. Naval Academy.

In the decades following Ed became a fixture at Striders races (as well as Marine Corps and Boston marathons). It wasn’t until Ed and Eileen’s four daughters started growing up that Ed dramatically increased his commitment to running and the Striders.

During his last two years in the Navy in 1990-91, Ed helped coach the Centennial High School Cross Country and Outdoor Track teams. As a Strider Ed has coached NextStep and as a member of the racing team Ed has been a mentor to us youngsters. Ed has run the Boston marathon nine years in a row and each year he has organized a post-race get together for as many Striders as he can track down. He has organized a biennial racing team Earth Day cleanup of the stream valley in Wilde Lake at the end of the Bagel Run course.

But there is no doubt that Ed has earned his position in the Hall of Fame by his dominance of the age group podiums.

Following Boston this year, Ed limped into knee surgery. The surgery was successful to the extent that he was told, with rehabilitation, he would be able to run again, though sadly not at the elite level.

Ed ignored the prognosis and recently Ed won his age group at the Baltimore Half Marathon, finished fourth overall (top grandmaster) at the Zaching 10k and won the Grandmaster prize at the Celtic Solstice 5 mile. 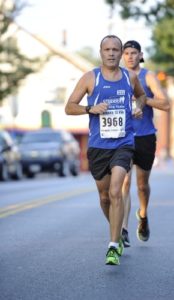