You are here: Home / Awards / Hall of Fame / Mike Fleming 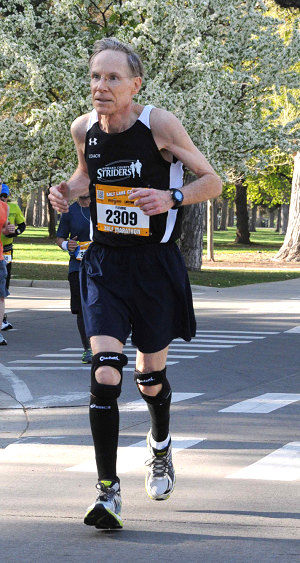 Mike is perhaps one of the most recognizable/best known of current Striders members. He races; he coaches; and he takes pictures.

A sprinter in high school, he stopped running until his mid-50s, when his children, Emily and Brian, started competing in cross country and track at Oakland Mills High School. Running with them led to Strider’s events. One of his fondest memories was a Metric Marathon 5K in 1997, when he ran 31 minutes, and realized that running could really be fun. As he ran more races, he found too, that assisting and contributing could also be rewarding. His achievements in racing, photography and coaching are all notable.

An avid photographer since 1972, he began capturing running events in the early 2000s. Since 2006, he has managed the official Striders’ photo presence on the club’s website. He doesn’t focus solely on racing, but also captures pre and post race activities and awards ceremonies, as well as organizing the thousands of shots and helping with presentations like the Striders’ annual meeting.

His personal running exploits are impressive. He has averaged 38 races per year, including many Striders’ weekly events. When racing special events, he’s pretty competitive in his age group, getting awards in 13 of 23 non-weekly events in 2015. He recently turned 70 years old, so all of his PRs were achieved while he was in his 60s. They include: one mile in 6:32; five kilometers in 21:59; five miles in 37:04; ten kilometers in 47:00; ten miles in 79:23; and in the Old Port Half Marathon in Portland, Maine, 1:57:25, good for second place in his age group. He also finished either first or second in his age group in the RRCA Grand Prix series in six of the past eight years.

In addition to photography and running, Mike has been a coach for the past five years, assisting and leading “Next Step” programs, mentoring new coaches and recruiting participants. He counts guiding a number of runners to goal race PRs as one of his favorite memories – right up there with winning the 2005 Resolution Run 8K (prediction race).