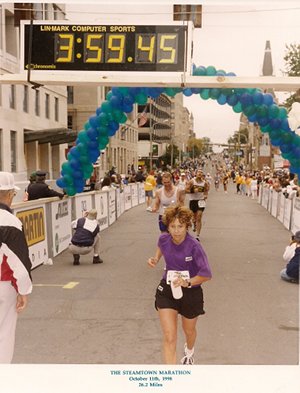 Nadia Wasserman has been a Strider for almost 30 years. She joined the Board of Directors in 1984 as head of the Women’s Committee. She later served on the board in numerous capacities, including At Large Member, Vice President, and from 1994-1996 as President. Nadia was race director of the Women’s Distance Festival and the Clyde’s 10K, and co-directed the 10-Mile Challenge Race. She also co-directed a number of weekly series and was in charge of the water for the Bagel Runs. She has won numerous Strider Awards: Volunteer of the Year, Most Improved Runner, and Grand Master Runner. In 1998, she was recognized by USA T&F Potomac Association for her contribution to Women’s Long Distance Running. Nadia also coached High School Cross Country and Indoor and Outdoor Track, heading up both the Boys and girls programs.

Nadia continues to volunteer at almost all club races, including registration for every Run Through the Grapevine XC race. She is on the Scholarship Committee and volunteers at the high school cross country meets. She was President again for two years in 2009/2010.