You are here: Home / Awards / Hall of Fame / Peter Keating

Peter Keating resides in Columbia with his wife Eileen and three children- Joseph, Bridget and Peter. Originally from Lancaster, PA where he attended Lancaster Catholic H.S., he was a varsity runner and team captain for both the Cross Country and Track teams and competed in the State Championships. He graduated from Drexel University in 1989 but did not compete due to lack of a Cross Country or Track & Field program. Peter competed in road races throughout the years during and after college until 1995,posting PR’s of 32:38 for the 10k,52:31 at 10 miles, and 1:11:29 for the half marathon. He is a veteran of 16 marathons. After a 10-year hiatus from running or competing, Peter ran the 2005 Harrisburg Marathon with minimal training and finished 5th overall in 2:53:27. This lit the spark to get back into competitive running. “I began racing again in 2006 in the Master’s division and was an active member of the Howard County Striders Racing Team from 2008 to 2014 and have since posted Masters PRs of 16:20 5K, 33:59 10K, 56:52 10M, and 2:43:31 marathon. He was awarded the Howard County Master Runner of the Year in 2008 and 2012 and was a recipient of the USATF Gold Philippides Award in 2009 and 2011. Although competing is his passion, nothing is more fulfilling to him than to be able to share this passion and pass on years of experience to the youth. He is fortunate to have been a coach for the Jr. Striders Cross Country and Track Program’s for many years (2007 to 2015). He had the privilege of training and coaching the Jr. Elite runners in preparing them to compete at the highest levels of the AAU and USATF. It has been a joy for Peter to watch them compete and develop over the years and to see them thrive at the High School and collegiate level in later years. He continues to assist at the Jr. Striders Track and Field meet as a finish line timer. Since 2011, he has been a coach for the Howard County Parks and Recreation Winter Running Program, in charge of introducing and developing kids ages 12+ to the fundamentals of middle distance running. The program focuses on the importance of stretching, drills and proper running mechanics. He plans on being an active member of the Howard County Striders and sharing his passion for running in the
community for many years to come and, health permitting,possibly get back into racing in the Grand Masters division. 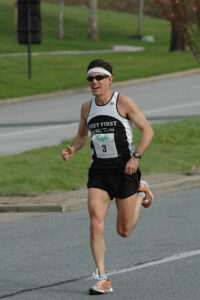 Some highlights of Peter’s racing include: