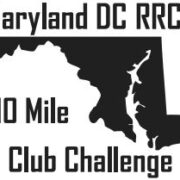 Thank you to everyone that came out for the 2022 MD-DC RRCA 10 Mile Club Challenge.  We appreciate each and every one of you and hope you had a great race!

2022 emergence from the pandemic had 15 member clubs participate, resulting in 681 qualified runners, and 564 finishers. Click the image below to view number of runners, by club and category

Update Feb. 25, 9:25am:
Results have been updated after the removal of some bad scan data. This impacted official finish times for runners between 1h15m and 1h18m. After correction, there was no change in team awards. Any questions can be emailed to the Race Director.

Special thanks to Pete Wergin and Casey Ahr for identifying the discrepancy.

2020 had 15 member clubs participate, resulting in 975 qualified runners, and 797 finishers. Click the image below to view number of runners, by club and category

The 2015 Club Challenge was cancelled due to inclement weather.

The Howard County Striders thought their chances for winning last Sunday’s 10-Mile Challenge went down the drain when racing team captain Carlos Renjifo pulled out of the race with an Achilles injury the week before. But Brian Harvey and Kyle Stanton stepped into the breach and delivered an astounding victory in the men’s team competition. Harvey and Stanton began the race in a tight contest with Dave Berdan from the nemesis Falls Road team. After a 4:40 first mile, the three of them were running neck and neck going across the bridge into the Allview community. When they came out of Allview, after running some serious hills, Harvey had taken complete control of the race. He cruised the remaining three miles all alone to win the race and set a course record of 51:00. Stanton bested Berdan by 14 seconds to capture second place, and the Strider men were on their way to beating the Falls Road Team for the first time in several years. The top 12 men from each of 10 local area running clubs scored in the men’s team competition.

A former all-American from Carnegie-Mellon, Harvey began his career at Centennial High School, while Stanton was an elite runner at Hammond High. Both won David L. Tripp scholarships as scholar-athletes. “It was lots of fun,” Mr. Harvey remarked about the race. “I’ve never really raced 10 miles before [only half marathons]!”

The Strider women also did something they had not done in many, many years: they beat the Falls Road women’s team. Master-runner-of-2012 Kelly Westlake spearheaded the effort by placing third among the women in a person record time of 1:05:02. She was actually leading the race for the first few miles, until Falls Road’s Christine Ramsey and Melissa Majumdar took over. The latter two ran the race in lock-step, finishing at virtually the same moment about two minutes ahead of Westlake. “After those hills,” Kelly said, “I’m looking forward to [flat] Cherry Blossom [10 Miler]. The winning Strider women’s team included new racing team member Jessica Ivy (fifth female), elite triathlete Suzy Serpico (sixth female), and half-marathoner Caroline Bauer (ninth female), who also set an improbable personal record. The top six women from each club scored.

The story was completely different, however, for the coed team competition. Somehow the Falls Road coeds pulled out a remarkable victory over Howard County. But the score was very close: 557 points to 559 (low score wins), with the point totals coming from adding up the finishing positions of the top 11 men and top 4 women. Race scorer Jim DiScuillo ran the tallies several times on the computer to guarantee accuracy. Falls Road might have had a better showing had some of their best runners not gone off to New Orleans to run a marathon or something.

The winning teams and the top male and female runners received trophies, but, to underscore the team nature of the race, there were no other awards. A new coed traveling trophy replaced the ancient (and ugly) 30-year-old trophy. The new trophy will reside at Falls Road Running Store – at least until next year.

This year’s Challenge enjoyed the nicest weather in the 33-year history of the event. Race-time temperatures were around 41F and the Sun was shining brightly. The only quibble might have been wet pavement. The weather was so fine that the post-race refreshments were served outside. Over 1000 runners registered for the race, and 739 finished, both of which are records.

The Howard County Striders stage the race every February. The race is the official 10-Mile Championship for the Maryland chapter of the Road Runners Club of America. The course runs south from the Howard Community College, circles through the hills of Allview, and returns through Hickory Ridge. Brad Murach made his premiere as race director. Although he had never directed a race before and isn’t even a runner, his day-job involves logistics, and he had no trouble organizing this baby. “He was calm and organized,” said his wife Cecilia. “I’m very proud of him.”